In 2001, the Euzkaldunak Board introduced the Legacy Award. This award is given to individuals who have exhibited a long-term commitment to the goals of Euzkaldunak. The following are the nomination letters for the 2022 Legacy Award recipients, Regina Bastida Aldecoa and Julia Uberuaga Coleman.

Regina Bastida Aldecoa:
Like many other charter members, Regina loaned personal money to the developing organization. By buying Euzkaldunak bonds, the land was purchased and the building construction began. When it came time to repay the loans of those bonds, Regina (and others) forgave the loan debt and donated their money so that Euzkaldunak, Inc., would have a lower financial burden as a new organization. That was Regina’s first significant commitment—but her contributions have continued in numerous ways for 70+ years!
Regina served on the Euzkaldunak Board from 1960-63, with responsibilities as Chair for the Annual Dinner & Bazaar, as well as coordinating morzilla making, bingo, games, etc. She volunteered for many events that followed.

In 1962, Regina volunteered in becoming the first Oinkari Business Manager. The Oinkaris were a newly formed dance group. The State of Idaho had asked the Oinkaris to represent Idaho at the Seattle World’s Fair (April 21-October 21, 1962). This was the first major event for the Oinkaris—who were accustomed to practices and some local performances. None of the leaders had experience to tackle a serious project that included extensive planning, financing, budgeting and fundraising.

The Oinkari leadership, specifically Al Erquiaga and Diana Urresti, approached the Euzkaldunak Board. They were seeking help to make this trip possible. The Board was split about being involved with the project. Regina advocated that the Board and Basque Center should be involved—and she personally took on this task as her project, becoming the volunteer business manager.
Regina sought out and secured donations from the Idaho and eastern Oregon Basque communities. She successfully raised the necessary amounts, securing two large donations from community leaders. The owner of the Idaho Daily Statesman made a large contribution, as well as providing publicity. AJ Achabal, owner of Boise-Winnemucca Stages bus lines, donated the use and related expenses of two buses, including the fuel and the drivers for the entire trip. Achabal even voluntarily drove one bus himself with the help of Gus Urresti. This major project resulted in much community outreach, publicity and engagement from Basques and non-Basques, and the success helped launch the Oinkari Basque Dancers. A broader base was in place by the time the next major Oinkari event took place only two years later—the New York World’s Fair in May-June 1964. Regina volunteered for years to come.

Regina’s background includes her service as a nurse. During WWII she enlisted in the Army and served in base hospitals in California, tending to wounded soldiers who had been returned Stateside for care. When she returned to Boise, she worked as a nurse anesthetist at St. Luke’s Hospital for 29 years. As a result of her professionalism and top-quality medical nursing, she received multiple accolades and awards. She regularly was called upon to interpret for Basque immigrants during their time of hospitalization. Regina continues to be a donor in the Boise and Basque community. At 100 years young, she still attends monthly dinners and is a friendly face to newcomers and to long-time members. If there is any legacy to our Basque community, it is because of mentors such as Regina Bastida Aldecoa.

Julie Uberuaga was born June 12, 1922; she would have celebrated her 100th birthday this summer.  Among the factors that make Julie such an important person to the establishment of the Euzkaldunak and the Basque Center is the circumstance of her birth.  She was born “belonging” to the Basque Boarding House at 607 Grove Street.  The youngest of the three children of Jose and Hermenegilda Uberuaga, Julie grew up in the midst of Basque language, music, dance and food. She also grew up with the hard work which came with maintaining a boarding house.

The first organizational meeting of the Boise Basque community to establish a “Center” was held February 6, 1949. Julie was 26 years old at this time.  Likely, about 70 people were in attendance. The first order of business was to appoint a temporary chairman and a temporary secretary-treasurer.  These jobs were to be for “that night only.” Julie and her brother Joe Uberuaga were chosen to be a team as secretary-treasurer.  Those in attendance accomplished much in that first organizational meeting:  determined the need to incorporate and elected “Incorporators”; elected a By-Law committee to establish “rules of incorporation”; determined that the new corporation should have a proper name and voted for “Euzkaldunak” (over suggested names as Centro Basque, La Jota Rondevous [sic], American-Basque Center, and Basques of America); appoint a dance committee; and set up the second organizational meeting in two weeks—and encourage everyone to bring another “Euzkalduna” to the meeting.  The By-Law Committee was elected that night with Pete Leguineche as Chairman.  Julie was elected to this committee along with Gus Urresti, Louis Madarieta, Lydia Lachiondo and Domingo Ansotegui.

At the first meeting of the newly formed Euzkaldunak, Inc., on February 20, 1949, Mr. Leguineche presented the proposed By-Laws, which were approved.  The articles covered:  eligibility for membership, annual meetings, quorums, dues, not-for-profit organization, Board of Directors, Committees, and more! The By-Law committee for which Julie was a member and record keeper had accomplished our basic groundwork in just two weeks’ time!  The By-Law committee continued its work throughout the year.  Also elected at this meeting were seven people to serve on the Board of Directors.

The first meeting of the Euzkaldunak’s Board of Directors was held February 24. The officers were to be a President, Vice President, and Secretary-Treasurer; and the Board would consist of five directors.  The first order of business was the election of a Secretary-Treasurer. Brother and sister Joe and Julie were appointed for this year-long position.  Julie was also appointed to handle the banking for the new corporation. The Board of Directors were elected, and the Board adopted the by-laws.  This included the dues established at $5 per person, 18 years and older, as recommended by the By-Laws committee.

The Board of Directors met March 3, 10; May 12, 20; June 3, 15, 22, 23; August 23; September 23, 30; October 7; November 11; December 13, 16; January 3, 1950, in preparation for the first General Meeting to be held on Saturday, January 7, at the American Legion Hall.  That is a total of 19 meetings from February 6, 1949, to January 3, 1950.  In addition, the Board sponsored a Basque Picnic on August 14, a Polio Benefit Dance on October 16, a Box Social on November 12, a Farmer’s Dance on December 10, and a Christmas Night Dance on December 25.  Because of Julie’s outstanding handwritten and then typed notes, we have knowledge of how our Euzkaldunak and Basque Center developed.  She also typed a financial report for each of the activities mentioned above.  Julie made the blueprint for records to come.  (Julie’s brother Joe Uberuaga resigned in the summer of 1949, so Julie was solely responsible for all the minutes and records and fiscal transactions.)  Most of the meetings dealt with finding a lot or an existing building that could be used to establish a Basque Center

“Song of the Basque” was performed in May of 1949.  Julie was one of twelve the “red-skirted dancers” who highlighted the two performances.

By the December 13, 1949, meeting, 2,000 membership cards for the year 1950 had been printed.  Membership cards were awarded to: #1 Luis Madarieta, President; #2 Tom Bicandi; #3-7 to the remaining Board members; and #8 to Julie Uberuaga, Secretary-Treasurer.  The responsibility for the membership cards and their sale landed with Julie.  She started out by selling 66 cards @ $5 at the Annual Christmas Night Dance on December 25, 1949.

The second General Membership Meeting of Euzkaldunak was held on January 7, 1950, at the American Legion Hall.  President Luis Madarieta called upon Secretary-Treasurer Julie Uberuaga who gave minutes of the previous year’s meeting, records of events for 1949, financial reports of activities throughout the year, and the balance of funds in both the checking and savings accounts as of 12/31/49. One of the main discussions at this meeting was—again—finding a lot or building to establish our own facility. Julie sold an additional 65 membership cards @ $5 at this meeting.  Julie had notified the Board that she had other commitments and was resigning as Secretary-Treasurer.  Julie continued her work with the By-Laws committee and many other Basque Center activities.

While Julie devoted that first year to Euzkaldunak, she continued to serve for years to come.  By January 1951, the options for a building site had been narrowed down.  The Uberuaga lot at 6th & Grove at $8,000 was the first choice.  Once the Board made the decision to buy this 60 x 120-foot corner lot, negotiations were handled by between the designated Board representatives and Hermenegilda Uberuaga and Julie.  Hermenegilda spoke very limited English; Julie spoke Basque and of course English.  Julie helped negotiate the entire sale and contracts, including the banking and payback terms.  This was a wonderful location—a great deal for the Euzkaldunak.

At the November 30, 1951, Board of Directors meeting, there was a discussion regarding membership.  Julie Uberuaga was the chairman of the Membership Committee and membership lists.  Her committee reported that it would send a mailing (precursor to our newsletter?) to members to let them know what all Euzkaldunak was doing.  She also made recommendations for some activities and dances to be for members only. This committee also worked on having most of the sheepherders staying in various boarding houses join Euzkaldunak. Julie continued to sell memberships at all events.  In addition, she worked on an insurance committee for many years, at least through 1956.  In November of 1954, she advised the Board that Euzkaldunak was covered by a vandalism policy (which cost $18.14).

At Board meeting on December 15, the directors went through the membership list to assign committee chairs for 1955. The first committee selected was Social—with Lydia Jausoro and Julie Uberuaga. In one year alone, they planned these events: March 5 Anniversary dance, August 7 Picnic, November 13 Open Dinner, November 23 Thanksgiving Dance, December 17 Basque Dinner, December 18 Christmas Party for Children, December 24 Christmas Eve Dance, December 25 card party, December 28 Annual Ball at Miramar, December 31 NYE Dance!  Julie and Lydia also participated in Music Week in May organizing a float and booths. They set up a schedule for events in 1956 and appointed chairmen for each one, as well as planning a Polio Dance for January 1956.

The book of minutes that I have ends in July 1956 so I can only rely on my memory of events where Julie participated.  I know she volunteered for Bazaars, for decorating floats, for concessions at the sponsored fights, for preparing “Pullman Loaves” for Kids’ Christmas Parties, for being chairman of a Harvest dance and many more.  Julie Uberuaga was among the women whom Euzkaldunak acknowledged in 2006 Legacy Awards as part of the Early Kitchen Crew.  Truly, she was always in the basement after the Basque dinners washing dishes and cleaning the kitchen.

Because Julie was gone from Boise for so long—moving to Santa Barbara at age 53 when she got married—I realize that her receiving this award might be a “hard sell.”  But I guarantee that Julie’s work in forming the Euzkaldunak, setting up the by-laws, and supporting the entire organization was intense. She accomplished so much!  And she was a charter member who maintained her membership and support for her whole life. She was a frequent donor, particularly for memorials.

Please give Julie Uberuaga Coleman, one of the founders and true charter members of Euzkaldunak, your favorable consideration for the 2022 Euzkaldunak Legacy Award. 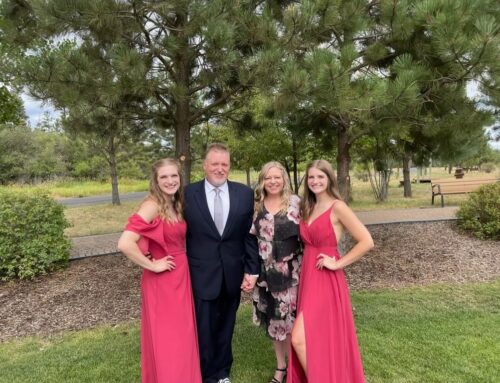 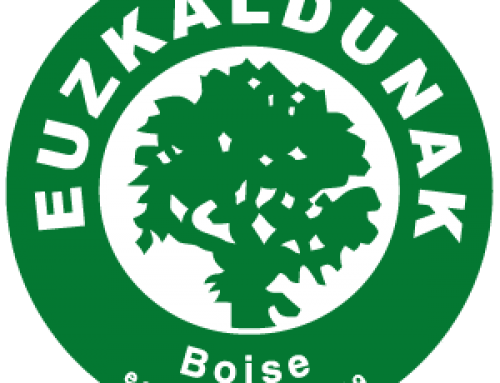 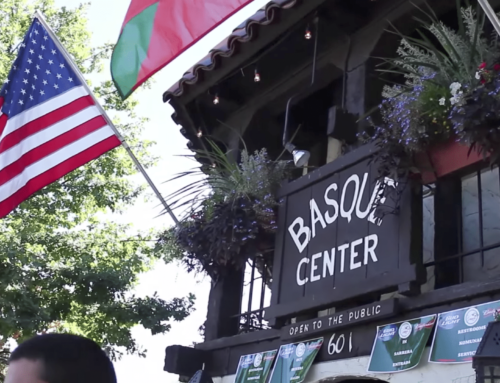 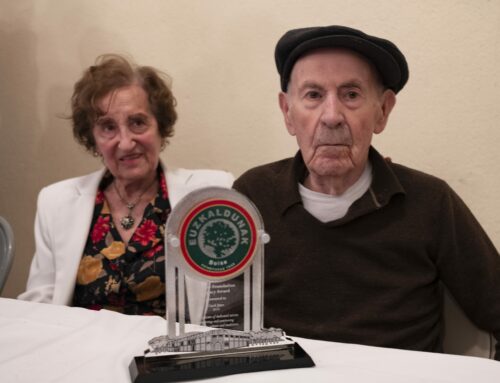 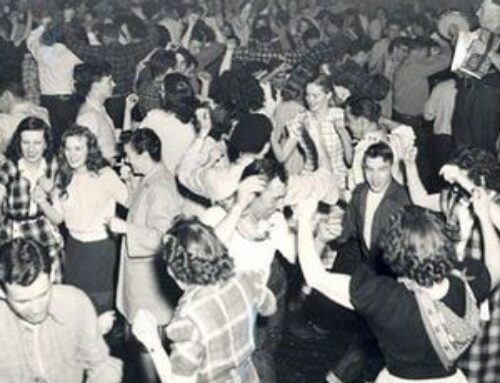